Film City Face-Off! | Should you relocate and where? 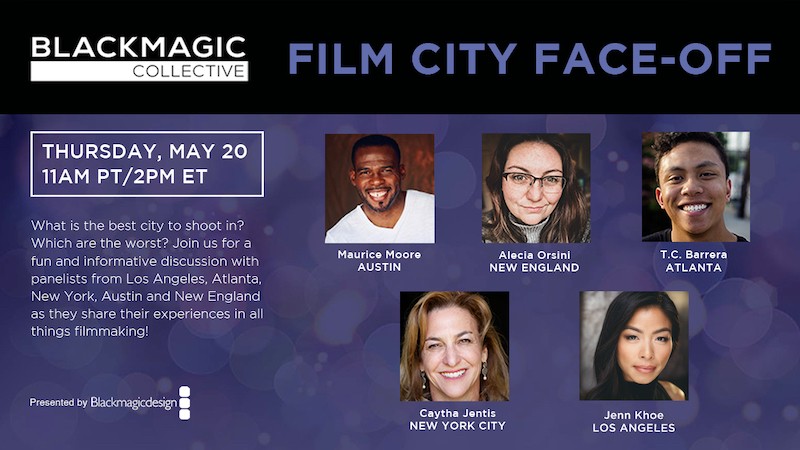 Join us LIVE to watch a battle between our five filmmaking city chapters where they will tell us the ins and outs of their location!

What is the best city to shoot in? Which are the worst? Join us for a fun and informative discussion with panelists from Los Angeles, Atlanta, New York, Austin and New England as they share their filming experience and knowledge for their areas and others as well! Learn about locations, permits, incentives, as well as how to find cast and crew, and ask about other places you want to shoot!

RSVP here and join us LIVE for your chance to win a seat of DaVinci Resolve ($295 value)! Must be a member of our Collective to win.

To learn more about Blackmagic Collective and everything we offer and sign up for FREE visit http://blackmagiccollective.com​

Maurice Moore “Mō” (AUSTIN) is the founder of Motivate Pictures. Motivate Pictures is a multi-media entertainment platform with a primary focus in Film and Television development and distribution. Before creating Motivate Pictures, Maurice had a long and entertaining journey in and around the film industry. Right out of the gate, Maurice received a life changing opportunity. As a child actor, his first role was in the Academy Award nominated film “The Color Purple” directed by Steven Spielberg. This fueled his passion at an early age of becoming a producer and filmmaker. After college, Maurice Co-founded his first production company JEMfire Entertainment, LLC in Austin, TX. JEMfire Entertainment focused on developing young actors and writers, as well as developing high concept short film content. Soon after JEMfire, Maurice lunched REELEYES Productions. REELEYES afforded local artists the structural knowledge and ability to create, develop and produce their own works. Through REELEYES, Maurice wrote, produced and directed a number of films including the award-winning dramas “In One Lifetime” and “Mind Reader 8.” Once he made the move to Los Angeles, Maurice founded ANAIK FILMS. Through ANAIK FILMS Maurice produced and directed multiple award winning and critical acclaimed films, including, “Reflections,” (which was the catalyst for Arnold Schwarzenegger’s short-lived Arnold’s Classic Film Festival), “Collisions,” “Sixufus” (Six of Us), “Break,” “Honeymoon” and “Founding Father,” among many others. Soon after, Maurice expanded with the development of ANAIK FILMS EUROPE, where he works abroad with filmmaking partners Alex Rios and Frank Rios, producing films internationally. Maurice is a well-respected and accomplished screenwriter having option and/or sold a number of original works for independent film companies and studios alike, as well as been a ghost-writer and script doctor on several motion pictures. He’s also an accomplished stage/film actor and acting coach. His “Breathe Acting Studio” located in Austin, TX is a training ground for aspiring artist who’s developing their craft and making a profound impact in the industry.

Alecia Orsini (NE) is an award winning Producer, Director and multi-media professional with 15+ years experience working in the film industry. She has worked for GBH fundraising and marketing for local NPR stations, owned her own video production agency as well as advised productions as a consultant. Alecia is a prominent voice in the region’s film community as President of Women in Film and Video of New England. She also devotes time to Save MA Film Jobs, working behind the scenes for the grassroots organization supporting the Film Tax Incentives in the state of Massachusetts. She’s a staunch advocate, utilizing her experience and platform to amplify the voices of the underserved within the film industry such as women of color and members of the LGBTQI+ communities. In 2012 she was named one of the Cape & Plymouth Business 40 Under 40 for her volunteer work & entrepreneurship and in 2019 she was named an Imagineer for her service to the film industry by Imagine Magazine. Alecia recently returned to the directors chair and completed filming of the short drama “Late Fall”. Aside from her professional work Alecia is a lifetime member of the Girl Scouts, can drive a stick shift and is the proud mother of a rambunctious toddler.

T.C. Barrera (ATL) is a writer and director originally from Los Angeles currently based in Atlanta. In 2016, he founded Big Pond Pictures, a company that works in creative development and is currently in development of its first independent feature, We’ll Be Okay, shooting later this year. He’s worked in every aspect of production; and, when he’s not directing, he works as an assistant director on projects ranging from massive triple-A, studio budgets to small micro budgets in feature films, commercials, and music videos. He’s had a passion for cultivating the next generation of filmmakers for years and loves the development of independent films. He likes long walks on the beach. He also prefers margaritas over pina coladas.

Caytha Jentis (NYC) is a successful independent 1ilmmaker who began making movies while driving carpools in suburban New Jersey. She currently resides in NYC. Pooling to Paradise is her most recent 1ilm that she wrote and produced and stars: Jonathan Lipnicki, Lynn Chen, Dreama Walker, Jordan Carlos and Taryn Manning. It will be released in the Spring. Caytha’s other 1ilm credits include: The Other F Word, a short form comedic series that originally streamed on Amazon Video direct. It was one of their top series four months in a row. The cast includes: Steve Guttenberg, Judy Gold, Alysia Reiner and Gilbert Gottfried. Bad Parents, a comedy that she wrote/produced and directed was licensed to Cinedigm and Relatativity Media currently streams on HBO and Starz. The movie had previously streamed on Net1lix and made Redbox and iTunes top 20 comedy lists. The cast includes: Janeane Garofalo, Cheri Oteri, Christopher Titus and Kristen Johnston. And Then Came Love, a romantic comedy feature, was licensed to Warner Brothers, reached net pro1its and played in heavy tv rotation. It now streams on Amazon. Its cast includes: Vanessa Williams, Eartha Kitt, Anna Camp and Ben Vereen. Caytha also wrote/directed and produced The One, (2009) a feature 1ilm drama distributed by TLA Releasing and wrote the thriller feature 1ilm Exposed. She began her career as a literary agent in New York. Caytha was pro1iled by the Writers Guild as well as Screenwriter Magazine. She is a member of the Writers Guild East, Film Fatales and the Producers Guild.

Jenn Khoe (LA) is an LA based Chinese American actress and producer who has created a career both in front of the camera and behind the lens. In 2017 she established her own production company and has line produced and cast indie films, music videos and commercials for a number of large advertising companies and international music labels including Beats Music, Google, X Factor, Intel, Universal Music, Interscope, and Sony Music Latin to name a few.

Carla is on a journey to make a career change to the film industry and learning with everyone else. Carla created Georgia Film Site because she wanted to share the resources she has found along the way.