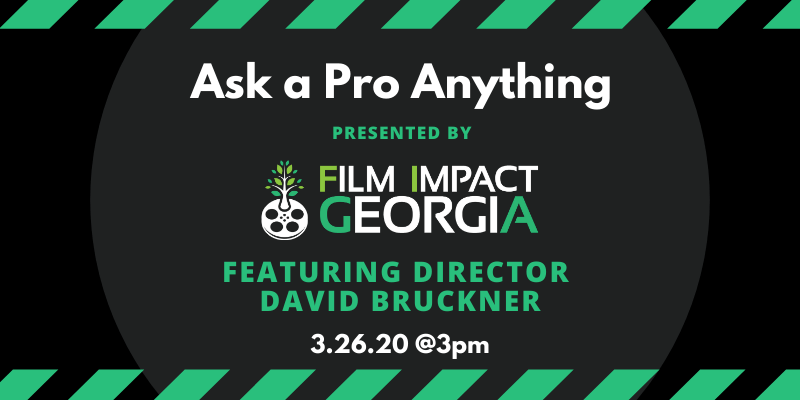 Introducing a new Film Impact Georgia virtual series called “Ask A Pro Anything”. This concept is Part TED Talk, part casual conversation designed to give people an inside look into our professional guest speakers’ process. We’ll start with exploring the ups and downs of their journey and then follow the conversation wherever it takes us.

This virtual event is all online through a video conference system and will be made available to the public with a “pay what you can” suggested donation of $20. All money raised through this series will go to fund the Film Impact Georgia’s Film Grant program. Our group of guests will be established working professionals who are directors, production designers, decorators, producers, actors and others.

We’ll be taking questions via Zoom chat, Facebook, and email, during the event, but we suggest you get your questions in early so you have a better chance of having your question asked. This event will be hosted on Zoom which is free to sign up for. It is helpful if you download the software before it starts. After completing your “purchase,” you will receive a link to the Zoom Conference (as well as reminded 48 hours prior, 2 hours prior, and when the event starts).

Our Guest is David Bruckner
David Bruckner is a well-known name in the Atlanta indie film scene. He attended UGA, was a co-founder of the Dailies film group, and was one of the directors of the breakout indie classic film “The Signal”, a Georgia-made landmark selling to Magnolia at Sundance in 2007. Five of his films have gone on to be accepted at the elusive festival (and TIFF!) over the years. His most recent film “The Night House” set records when Searchlight took global rights making it the highest grossing genre acquisition in the history of the renowned festival. We’ll be discussing some of the valleys and peaks of his career, what it’s like to be struggling artist while being in the headlines and learn how he went from a low budget indie filmmaker to a studio director even touching on some on his work on the recent season of “Creepshow”. Plus we’ll take your questions on all things filmmaking.