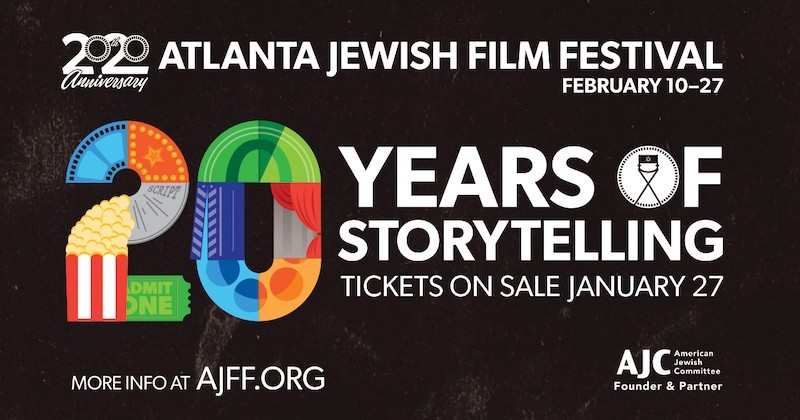 The Atlanta Jewish Film Festival celebrates its 20th anniversary this year. The 18-day festival features unforgettable cinematic stories from around the world, experienced together as a community gathering, and presented in the very special way that only AJFF can.

For the 2020 Atlanta Jewish Film Festival (AJFF), the following are a few key dates to keep in mind:

Monday, February 10: Opening Night of the 2020 AJFF
The 2020 AJFF celebrates its Opening Night with the world premiere of “Shared Legacies: The African-American Jewish Civil Rights Alliance” that explores the historic relationship among civil rights pioneers, including many notable Atlanta leaders. There will be Q&A session after the film with Reverend, Dr. Gerald L. Durley, Louis Gossett Jr. and Martin Luther King III.

Saturday, February 15: Young Professionals Night
Young Professionals Night, presented by ACCESS Atlanta and American Jewish Committee’s young leadership division, is reserved for festival-goers 40 years old and under. The pre-show party in Center Space will be followed by the screening of buddy comedy “Standing Up, Falling Down”, starring Billy Crystal and Ben Schwartz, in the Rich Auditorium. Party at 6:30 PM / Film at 8:00 PM

Friday, February 23: Last Week at Ed’s
Lawrence Kasdan, screenwriter of blockbuster films such as Empire Strikes Back, Return of the Jedi, Raiders of the Lost Ark, The Force Awakens and Solo, directs this fly-on-the-wall passion project with his wife and fellow Oscar nominee Meg Kasdan. Q&A session with Lawrence and Meg Kasdan after the screening.

Thursday, February 27: Closing Night
The 2020 AJFF concludes with a screening of “Saul & Ruby, To Life!” — a new documentary by Academy Award-nominated and Emmy-winning documentarian Tod Lending that follows the extraordinary musical journey of Holocaust survivors Saul Dreier and Ruby Sosnowicz. A performance by Saul and Ruby will follow the screening along with a Q&A session with filmmaker Tod Lending and dessert reception.