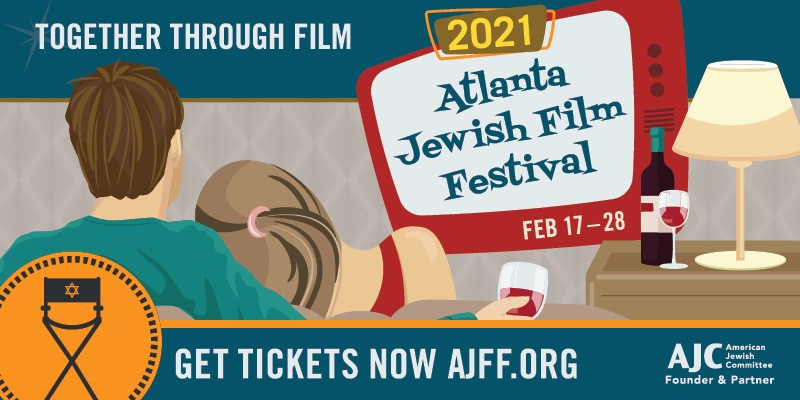 The Atlanta Jewish Film Festival (AJFF) is thrilled to announce the return of its annual festival, the 21st edition, to be held as a hybrid event across 12 days from Feb. 17-28, 2021. In response to the ongoing pandemic, AJFF has reimagined the festival experience to combine at-home virtual screenings with select drive-in movies, expanded conversation with filmmakers and special guests, as well as other unique components that prioritize the safety, comfort and convenience of audiences.

For the 2021 Atlanta Jewish Film Festival (AJFF), the following are a few key dates to keep in mind.

Wednesday, February 17: Opening Night of the 2021 AJFF
One night only, join fellow AJFF festivalgoers for the kickoff of the 12-day hybrid experience and preview of what’s to come. Then enjoy the Opening Night screening of “Kiss Me Kosher” from the comfort of home, with a complimentary, curated Festival-in-a-Box. Plus gourmet dinner from Added Touch, available for purchase with delivery or pickup.

Thursday, February 18: Young Professionals Night, presented by AJC ACCESS
Join Atlanta’s young professionals for a shared but safe drive-in experience like no other at the Home Depot Backyard adjacent to Mercedes-Benz Stadium in downtown Atlanta. This drive-in film screening will be for the new, edgy comedy Shiva Baby, a SXSW Grand Jury Award nominee and winner of the L.A. Outfest screenwriting prize. Food trucks and live presentations from ACCESS complete this fun and exciting evening. Your drive-in ticket includes a complimentary swag bag.

Saturday, February 20: Spaceballs Drive-In Screening
For one night only, join the Atlanta Jewish Film Festival for an exclusive drive-in screening of Mel Brooks’s sci-fi spoof Spaceballs at Mercedes-Benz Stadium’s The Home Depot Backyard. The drive-in experience, the largest in Atlanta and unlike anything that the city has ever seen, provides guests the ability for guests to watch on the big screen while staying socially distant from other attendees. Food trucks will also be on-site serving delicious bites.

Saturday, February 20: Midnight Screening of The Vigil
Turn down the lights and pull up the covers, as the Atlanta Jewish Film Festival presents its first ever midnight movie. The Vigil offers lots of atmospheric chills and thrills, best traversed at the stroke of twelve. Count down to the start of the scary fun with a spooky bonus preshow.

Sunday, February 21: Little Shop of Horrors Drive-In Screening
For one night only, join the Atlanta Jewish Film Festival for an exclusive drive-in screening of musical comedy Little Shop of Horrors at Mercedes-Benz Stadium’s The Home Depot Backyard. The drive-in experience, the largest in Atlanta and unlike anything that the city has ever seen, provides guests the ability for guests to watch on the big screen while staying socially distant from other attendees. Food trucks will also be on-site serving delicious bites.

Thursday, February 25: Virtual Lobby: I Am Here
The Virtual Lobby is a place to see your fellow festivalgoers and indulge in a little conversation around the most talked about films at the 2021 Atlanta Jewish Film Festival. Join AJFF for a discussion of “I Am Here”, the story of a spirited South African Holocaust survivor reveals to her family her astonishing life journey on her 98th birthday.

Sunday, February 28: Closing Night
The 2021 AJFF closes with a documentary screening of Howie Mandel: But, Enough About Me. As a warmup act to Howie Mandel’s heartwarming biographical doc, we’ll welcome to the virtual stage some local comedy talent to tickle your funny bone. You can complete your Closing Night experience with a gourmet dinner from Added Touch, available for purchase with delivery or pickup.

About Atlanta Jewish Film Festival: AJFF’s mission is to entertain and engage diverse audiences with film through a Jewish lens while simultaneously challenging conventional perspectives on culture and history, life in Israel, and the work of Jewish artists – particularly where these stories intersect with other communities. While traditional in-person programs are on hiatus during the COVID-19 pandemic, AJFF has launched a series of virtual initiatives to serve its audience, including the “In Conversation” podcast and webinar series, a 20th anniversary “Playback” bracket-style film competition, and the “AJFF Recommends” online catalog of Jewish cinema. In addition to its core programs, AJFF continues to work alongside its many partner organizations to support the greater Atlanta community while raising the bar for film festivals worldwide. Founded by the Atlanta Regional Office of American Jewish Committee (AJC) in 2000, AJFF has operated as an independent non-profit arts organization since 2014, while continuing an active partnership with its founding agency.